Alloy 6 is a new major version. It features new keywords and symbols that allow to specify and assess behavioral models natively (rather than by modeling traces explicitly as in previous versions). It also features new solving techniques as well as an upgraded Visualizer. A full reference for the language is available here. Notice there are a few syntactic changes with respect to older versions of Alloy (see the bottom of this page). 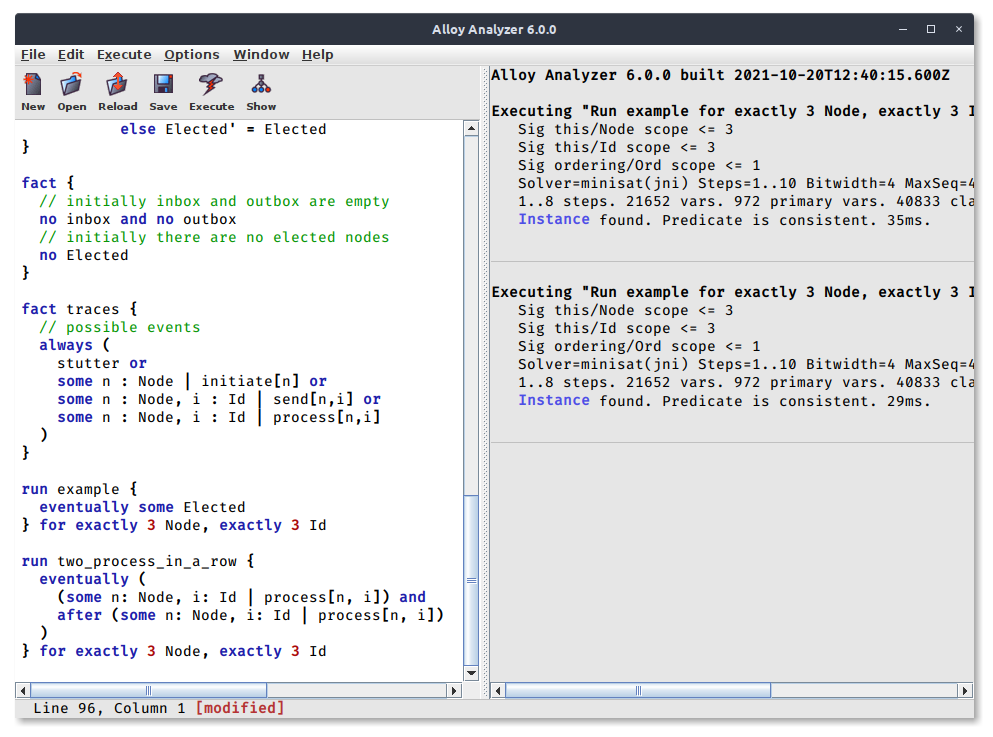 Value of an expression in the next state

The value of an expression e in the next state is denoted by e' (e followed by a quote). In addition to constructs from relational logic, constraints are also extended with linear-time temporal logic with past connectives, which allow to reason about future and past states along a trace (the meaning of connectives is given below).

Instances are now traces, that is infinite sequences of states, where a state is a valuation for signatures and fields. The considered traces are represented as lasso traces: that is, finite sequences featuring a loop from the last state back to a former state. Because the last state can be looped back to itself, this is completely general. The Visualizer shows a depiction of the currently-displayed lasso trace, between the toolbar and the visualization pane (see below).

An instance for a model that does not feature variable signatures or fields can be thought of as a trace made of a single state with a loop to itself. In such a case, notice the Visualizer works exactly as in older versions of Alloy.

The valuation of a mutable signature or field is likely to vary from state to state in a given trace, while static (that is, immutable) ones remain unchanged in a given trace. Due to the possible presence of toplevel mutable signatures, the keywords univ and iden no longer represent constants and should themselves be considered mutable values. On the other hand, the interpretation of a plain old Alloy model (provided it does not use any Alloy 6 syntactic construct) collapses to the usual Alloy semantics.

Analyses proceed as in Alloy by bounding signatures. In addition to placing bounds on sets assigned to type signatures, the scope specification may constrain the time horizon, that is the possible number of transitions of lasso traces to explore (recall that traces are infinite but periodic, which allows to represent them as finite lasso traces). To do so, Alloy features a reserved steps keyword to be used like type signature names in plain scopes (steps cannot be used anywhere else):

As discussed just above, Alloy 6 now offers the possibility to perform complete model-checking, that is model-checking over all possible traces, without bounding them upfront (as explained above, the time scope must be set to 1.. steps). This is possible because the state space is finite thanks to scopes on signatures. Complete model-checking is theoretically guaranteed to terminate, but may fail due to lack of memory or may run for too long. Currently, NuSMV and nuXmv are supported (notice that they can also be used for bounded model checking): they must be installed by the user.

The Options menu also features an entry labelled Decompose strategy which allows the user to customize the way followed by the solver to explore traces by leveraging multiple CPU cores:

Every such operator is interpreted in a given state of an instance (trace). To give a precise semantics, we consider the trace to be indexed by non-negative integers, starting at state 0. Then, the meaning of these operators is as follows:

The (right-associative) ; operator is useful to describe sequences of operations, to describe a scenario passed to a run command for instance. Indeed, supposing p, q, r and s are predicates representing operations, a run command specifying that they are played in sequence could be written:

With ;, one can simply write:

The meaning of these operators is as follows:

Alloy 6 also features a Visualizer enhanced to display traces in a user-friendly way. The visualization pane shows variable fields and signatures with dashed lines. It is split into two contiguous panes which show two consecutive states. The lasso trace depicted above the two states shows where you are in the trace by coloring the states in white. Finally, the Visualizer features a sophisticated way to explore alternative instances of a specification:

Alloy 6 uses new symbols (exactly two: the single quote ' and the semicolon ;) and several new keywords (as well as ones reserved for possible future extensions) listed below in alphabetical order:

Alloy 6 is compatible with old models as long as they don’t use these symbols or keywords.

On the other hand, if an old model of yours uses single quotes or some of these keywords (as identifiers), then you will have to replace them to ensure that Alloy 6 interprets your model as before (for instance changing var into var_ or variable or foo). Notice the single quote can for instance be replaced with the double quote symbol " (which is legal Alloy).